US political discourse is so toxic and divided that friends of 30 years no longer talk to me. The America I loved has gone forever

The bitter divisions in America are turning neighbour against neighbour and tearing families apart, amid an atmosphere of indoctrination where freedom of thought and speech is outlawed. I fear we’re on the road to civil war.

2020 has been one hell of a year. It included getting Brexit done, Covid-19, big-tech tyranny featuring extreme censorship by Twitter, Google, Facebook and Amazon as well as the stealth implementation of a social credit framework by Silicon Valley oligarchs as they plunder the economy under the diversionary power grab by pay-to-play politicians implementing quasi-permanent unlawful lockdowns. I’m sorry to say that the USA will become a banana republic.

The intelligentsia has created a toxic environment of indoctrination where freedom of thought and speech is outlawed. The student “mob” will enforce the process of re-education, utilizing lies, propaganda, peer-pressure and fear of cancellation. No student or adult should be intimidated, bullied or harassed to the point of unwavering compliance. There is something systematically rotten in our educational system, and it needs to be purged of these radical ideologues. These are fascist tactics – USA-style.

Be careful! Cycling champ’s fate shows that tweeting emojis in support of Trump might cost you your job

The Trek-Segafredo cycling team has suspended junior road race world champion Quinn Simmons over “incendiary” tweets that show support for Donald Trump. Is this really all it takes to lose a career today?

The first tweet in question from Simmons came in response to Dutch CyclingTips journalist José Been calling Trump a “vile, horrible man” and informing any of his supporters to unfollow her on the social media platform.

“My dear American friends, I hope this horrible presidency ends for you. And for us as (former?) allies too,” Been tweeted. “If you follow me and support Trump, you can go. There is zero excuse to follow or vote for the vile, horrible man.”

Simmons, who is 19, responded with the word “bye” and a black hand-waving emoji. 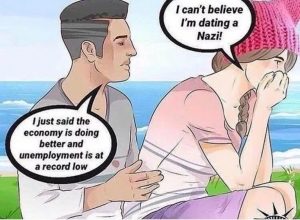