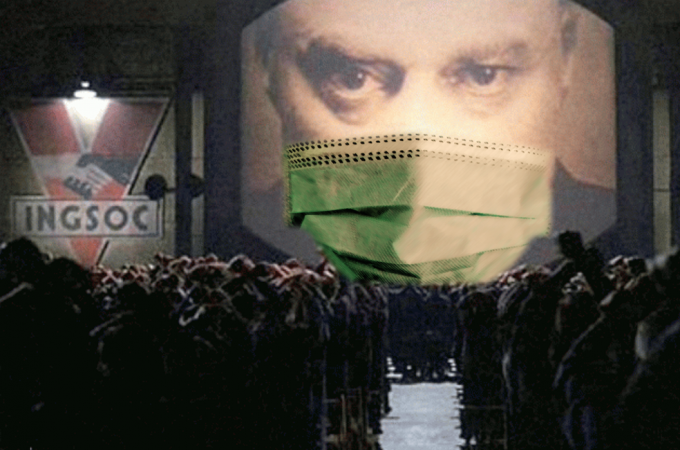 This Week in the New Normal

Doctors should “give priority” to vaccinated patients Ruth Marcus, a deputy editor at the Washington Post, has had enough of people pussy-footing around this issue and is going “come right out and say it” – unvaccinated people deserve healthcare less than vaccinated people. She at least admits this “conflicts radically with accepted medical ethics”, which […]

Read More » This Week in the New Normal

Ryan Matters Death counters, case counters, faulty tests to inflate death numbers, footage of patients on ventilators, apparent corpses on the streets in Wuhan, and highly transmissible “variants”.   What do all these things have in common? They cause fear and anxiety. They are devices used to not only weave a narrative but to instill a […]

Mikael Thalen Rob Monster sparred with journalist and hackers and even asked Jesus to rebuke the demons in the room. Rob Monster, the CEO of domain registrar and web hosting company Epik, finally responded to the massive breach of his company on Thursday evening in a bizarre and chaotic video conference. Earlier this week a […]

The US Federal Aviation Administration has barred drones from flying over a south Texas bridge where more than 10,000 migrants have gathered, preventing local media from capturing aerial footage showing conditions at the site. An FAA notice issued on Thursday evening announced a two-week no-fly zone for unmanned aircraft systems (UAS) over the Del Rio […]

MUST HEAR THIS! Terrific statement last night from Tucker — he lays out the immediate agenda for VAX passport cards transitioning to an all-digital platform for every individual. https://www.bitchute.com/video/aQbbCuWoUtBb/

How have previously normal people become so eager to deal out death in judgment? Todd Hayen A friend of mine, Dr. Mark McDonald, who is a prominent psychiatrist and has a very prestigious practice in California, told me this in a recent conversation: “Pandemic of the unvaccinated” has emerged as an expression of propaganda meant to […]

‘They crave his War on Terror’: Glenn Greenwald tears into liberals for praising George W. Bush’s 9/11 speech on threat ‘at home’

“Liberals swooned emotionally all day yesterday for George W. Bush because they crave his War on Terror, but just want it unleashed domestically at their political opponents,” Greenwald declared. “Hearing Bush link 9/11 with 1/6, and compare his War on Terror with their new one, was ecstasy for them,” he argued, calling comparisons between […]

Read More » ‘They crave his War on Terror’: Glenn Greenwald tears into liberals for praising George W. Bush’s 9/11 speech on threat ‘at home’

The ACLU, Prior to COVID, Denounced Mandates and Coercive Measures to Fight Pandemics

[“Freedom is Slavery”  — George Orwell’s 1984] In a New York Times op-ed this week, the group completely reversed its views, arguing vaccine mandates help civil liberties and bodily autonomy “is not absolute.” By Glenn Greenwald https://greenwald.substack.com/p/the-aclu-prior-to-covid-denounced If you were surprised to see the ACLU heralding the civil liberties imperatives of “vaccine mandates” and “vaccine […]

Read More » The ACLU, Prior to COVID, Denounced Mandates and Coercive Measures to Fight Pandemics

What Happened With the Tumultuous Pro-Bolsonaro Protest in Brazil? Plus: a Rumble Update

Glenn Greenwald Most media narratives about the September 7 protests specifically, and this broader conflict between Bolsonaro and the Supreme Court more generally, have been highly reductive and free of context. They either cast these events as the latest steps of a maniacal dictator bent on destroying Brazilian democracy, or a righteous stand against a […]

Read More » What Happened With the Tumultuous Pro-Bolsonaro Protest in Brazil? Plus: a Rumble Update
Next Page »