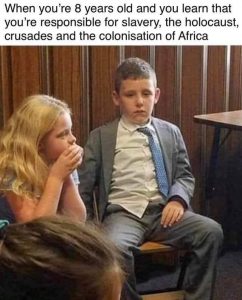 ‘Imagine a new form of totalitarian government, composed of people who have been educated into believing that they hold a superior intellect and morality to their own constituents. Imagine a new form of government so convinced of its virtue mandate, that its own constituents are now the enemy, and no longer foreign invaders or agencies.
Imagine a single dominant Party which incites Kristallnacht violence in the streets, smashing windows and burning businesses, because they hold that The Party and their Billionaire Cronies who fund all this are indeed the victims and ‘resistance’. A new, smarter form of diabolical tyranny is on the block, and it is called tyflocracy.’

Tyflocracy /philosophy : illicit governance : expansion of power by strategic employment of risk/ : /from Greek: τυφλός (tyflós: blind eye)/ : a government which has declared an asymmetric war of risk upon its own citizenry. A government which has illegitimately concluded that those constituents to whom it used to report and who seek to hold it accountable, have now become the enemy.
[from above article]