The World Goes On While America Sleeps

Debt is soaring, jobs are ending, cancel culture is spreading like a virus, and China is laughing.

Meanwhile, hundreds of billions of dollars and countless hours of once-productive labor are diverted to unproductive ideological censorship, career canceling, and indoctrination.

Our allies, such as democratic France, warn America that it is cannibalizing itself — and becoming dangerous to others. Our enemies, such as the totalitarian Chinese, are delighted with our suicidal wokeness.

The cost is not just the expense of cleaning up the billions of dollars of destruction from the summer riots, the thousands of memorials and statues destroyed and defaced, the hundreds of schools and buildings to be renamed.

Far more consequential is the suppression of creative thinking — from humanistic study to scientific research.

What was written or advanced in Communist Eastern Europe and the Soviet Union is largely discredited, given that commissar hacks determined the rules of publication and research.

Something similarly frightening is now occurring in the United States. Scholars, journalists, artists, and educators feel they must mouth politically correct platitudes. They constantly hedge their public discourse in fear of career cancellation. They strain to synchronize their research with some approved woke ideology to save their livelihoods.

When professors must write “diversity statements” and hire, promote, and fire on the basis of race, the model is not the U.S. Constitution, but something out of contemporary China.

No one pays much attention that our capital is now weaponized with soldiers in camouflage and barbed wire. 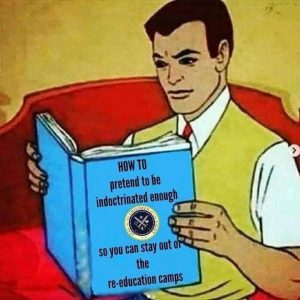