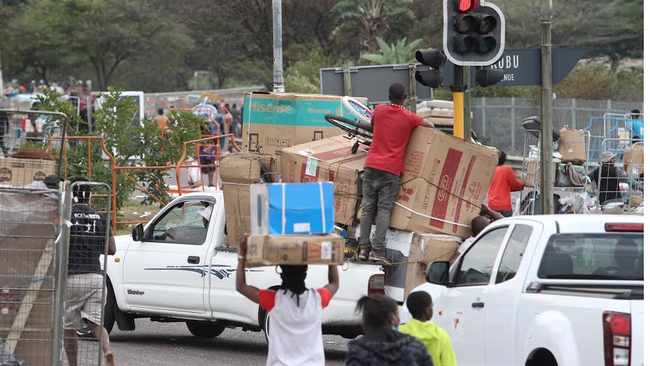 Editor’s Note: This is a work in progress.

It’s “racist” to point out what has changed https://t.co/sCJaFrvLo9

When memes turn into reality: It seems only one store in Watercrest Mall was untouched. But which one?? pic.twitter.com/V4zejLYG0S

The official number is 72 dead still, that may climb. Things have slowed down a bit, largely focused around KZN/Durban.

#SouthAfrica Inside one of the biggest warehouses in South Africa, that’s been looted during violent protests. This is Value Logistics in Cato Ridge near the N3 freeway between Inchanga & Durban. It supplies major food, electrical and furniture outlets in the country. #eNCA pic.twitter.com/OonVGGLFSS

Meanwhile in South Africa, the country is in chaos …… pic.twitter.com/UcARAAAXYa

Indians beating looters with bats as you hear shots in the background. One of the defenders can be heard yelling “fuck off black.” pic.twitter.com/SGgMwLpewu

The supply chain has broken down. Honest people in Durban KZN South Africa can’t even buy food if they happen to find an unlooted store. pic.twitter.com/DX2lI0BERv

Posted about this earlier, but really need to see it for the reality to sink in. trucks forced to dump thousands of liters of milk because the depots who are supposed to take them are all burned/damaged/unmanned. Electric plants & factories are burning, & a famine is imminent pic.twitter.com/gPO3Uxa8Bh

Graveyard of looted items. Doesn’t seem like they know what to do with it all the things they’ve stolen. pic.twitter.com/DFigfTQbPS

Earlier this afternoon: Massive queues to get into a store for groceries. The majority of stores are inaccessible or have no more supplies. pic.twitter.com/Dla6WdNcia

Simon Mwewa Lane’s message to South Africans: “If you don’t put that country back together again, just give it back to the Boers.” Full clip available here, worth checking out: https://t.co/nCIjVMqs0L pic.twitter.com/QHNZxxWIY7

Looters showing off their massive scores. They seem to be very impressed with themselves. pic.twitter.com/8knS74lCFO

Footage shows dead fish/crayfish on beaches of Umdloti (North of Durban). Presumably, the runoff from the chem. plant in Cornubia that caught fire spilled into ocean & is responsible. Residents reported strong chemical smells coming from the ocean & advised to stay off the beach pic.twitter.com/tKZIRgg6th

The Minister of Police, Bheki Cele, “discovering” thousands of rounds of ammunition in the street.

This + footage of citizens defending themselves & their homes w/ licensed firearms, will be used to justify the upcoming Firearm Amendment Bill to remove the right to self defense pic.twitter.com/2y3hLCuf96

Car trunk filled with looted frozen chicken wings and other foods. No regard whatsoever for the rest of these citizens who will begin to go hungry in a matter of days pic.twitter.com/bGUpPSSDmN

Messages from Indian South African woman claiming that the looters are shooting and coming into homes. She is asking us to pray in Jesus name pic.twitter.com/cMOQT10C1x

Indians handing out bread despite having to protect their communities from predatory blacks for the last 3 days. Might want to keep this kind of thing under wraps though pic.twitter.com/Od6QSABJlb

Floors intentionally made slippery as a method to thwart looters in an increasingly rare intact mall. Let’s see if the Wet Floor defense holds up… pic.twitter.com/J9yaeVaERF

Police in Durban South Africa have told citizens to stop patrolling their communities for looters, which is insane. Now black rioters are threatening the Indians who are killing black looters. pic.twitter.com/SS4sUkyV0l

Police guarding the road as a mob of black looters makes it’s way toward them. This could’ve been a deleted scene from Dawn of the Dead. pic.twitter.com/zvkrN9FXdF

more video from the storage units that were looted out.

they ripped everything they could off this car. #SouthAfrica pic.twitter.com/EO0HvXpMLX

some looters were reportedly stripped naked and forced to crawl around on all fours by fellow blackspic.twitter.com/CcgqxR25IK