With the 2020 US presidential election less than a month away, there is widespread speculation concerning Democratic nominee Joe Biden’s mental and physical fitness at 77 years of age if he were to defeat incumbent Donald Trump on November 3rd.

The former Vice President and Senator from Delaware would surpass his opponent as the oldest to ever hold the office of the presidency if victorious, while his generally acknowledged cognitive decline has led many to question whether he is even capable of serving a single term.

Given the concerns about his health, the likelihood that Biden’s running mate, Senator Kamala Harris, would become his successor has put the controversial former prosecutor and California Attorney General’s own politics under scrutiny, though not to a degree sufficient with the odds she could very well become commander-in-chief in the near future.

Trump himself suggested it was the hidden motivation behind House Speaker Nancy Pelosi’s recent introduction of a 25th Amendment commission on removing a “mentally unfit” president to enable the replacement of an incapacitated Biden with Harris after the election.

Even Saturday Night Live recently joked about Biden’s poor first debate performance as a Harris term in-the-making — but as journalist Caleb Maupin explains in his new book Kamala Harris and the Future of America: An Essay in Three Parts, the prospect of her becoming president is no laughing matter.

Maupin’s ambitious essay surpasses the redundant analysis of the vice-presidential nominee by placing her political success in a broader historical context while forewarning the unique danger of a budding Harris administration waiting in the wings. 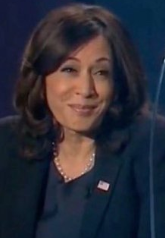