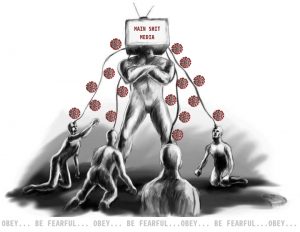 Graham Dockery
Joe Biden is a swamp creature to his core, but to mainstream pundits, his arrival in Washington is akin to the second coming of Christ. The sycophancy is pathetic, but it’ll soon get dangerous when Joe actually starts to govern.

The return of a clapped-out career politician to the White House has the mainstream media squealing with delight. Their liberal bias hasn’t exactly been a secret these last four years (“fiery but mostly peaceful” Black Lives Matter protests vs. the “extremist insurrection” on Capitol Hill being the latest example), but their outpouring of emotion over Biden’s inauguration would make even a North Korean news anchor blush.

Biden, the Democratic Party, the Bush-era ghouls still filling guest slots on anti-Trump TV networks, and now liberal journalists are all in agreement on the need for a domestic PATRIOT Act (although, surprisingly, ‘The Squad’ have objected to this). Reporter Glenn Greeenwald catalogued the calls for authoritarianism in a recent blog post, with some notable examples including the Daily Beast (already essentially a laundry for CIA press releases) demanding a new domestic spy agency to stop the “white terror,” and a former intelligence official suggesting Trump supporters be given the “Al Qaeda” treatment.

With the aid of the press, the repression will be sold as a righteous crusade against the forces of racism, extremism, and white supremacy. However, with the benchmark for “extremism” set at “rowdy Trump supporters,” the state and its allies in Silicon Valley will simply criminalize dissent from the right and prevent the next Trump-style challenge to their power.

They’re not actually looking for the next Timothy McVeigh. They just want Americans to view their flag-flying, gun-owning, Trump-voting neighbors as potential McVeighs and treat them accordingly.