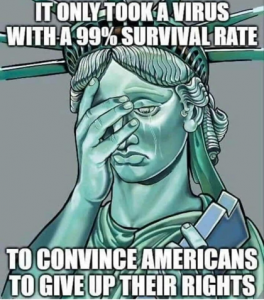 Neil Clark is a journalist, writer, broadcaster and blogger. His award winning blog can be found at www.neilclark66.blogspot.com. He tweets on politics and world affairs @NeilClark66
The banning of the former TV presenter from Facebook and YouTube is an assault on free speech and free expression which needs to be forcefully resisted, whatever your views are on Icke’s theories on world governance.

I’m old enough to remember when David Icke was a television sports presenter. For the past thirty-five years or so he’s been putting his ideas out on how he thinks the world operates – and it’s fair to say he has caused plenty of controversy. Some people laughed at him, some agreed with him, some were indifferent. No one campaigned for him to be banned.

Recently though, that’s changed. Icke has been accused of “preaching hate” and of peddling “unsubstantiated conspiracy theories.” And now he’s charged with promoting “toxic” and “dangerous misinformation” about Covid-19.

Writing in the Observer on April 25, Nick Cohen berated social media platforms for not banning Icke.

Less than 20 minutes after he tweeted his piece, the “mysterious wikipedia editor” Andrew Philip Cross had added the article to Icke’s wiki page.

And, just a week later, both Facebook and YouTube had obliged, deleting Icke and all his work.

Cohen argued there was a “liberal” case for banning Icke. But there isn‘t and it‘s extremely Orwellian to suggest that there is. No one is forced to listen to Icke or read his books. If Cohen takes issue with Icke‘s positions, he should challenge him to a public debate. If what Icke says is so obviously crackers, then the Observer columnist should be able to wipe the floor with him very easily. Instead, he seems to want him silenced. That’s disturbing.