Don’t wait for the oligarchy to let you in. Just walk away.

When Machiavelli wrote, “in order to know Moses’ virtue it was necessary that the people of Israel be slaves in Egypt …,” he was pointing to the truth that knowing what one is up against is a powerful incentive for dealing with it intelligently. Genesis tells us that only in Moses’ time did the Egyptians make clear how harsh was the alternative to the Exodus by deciding to kill their longtime slaves’ baby boys.

Today, the oligarchy that controls American society’s commanding heights leaves those who are neither its members nor its clients little choice but to marshal their forces for their own exodus. The federal government, the governments of states and localities run by the Democratic Party, along with the major corporations, the educational establishment, and the news media set strict but movable boundaries about what they may or may not say—on pain of being cast out, isolated from society’s mainstream. Using an ever-shifting variety of urgent excuses, which range from the coronavirus, to the threat of domestic terrorism, to catastrophic climate change, to the evils of racism, they issue edicts that they enforce through anti-democratic means—from social pressure and threats, to corporate censorship of digital platforms, to bureaucratic fiat. Nobody voted for this. 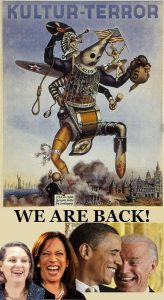