WATCH: Protesters armed with rifles face off against police APC in Kenosha after latest police shooting

Posted on August 25, 2020 | By gassasb | No comments
https://video.twimg.com/ext_tw_video/1297761857223168000/pu/vid/640×360/U7aSkSrNHNTOAzk9.mp4?tag=10
RT
In the wake of the latest police shooting in Kenosha, Wisconsin, protesters armed to the teeth with semi-automatic rifles have faced down an armored personnel carrier, amid widespread rioting, looting and violence.

In a disturbing escalation of tensions, several heavily armed and armored protesters surrounded the police BearCat vehicle in the early hours of Monday morning. At one point, an officer is seen opening the hatch on the roof and throwing a tear gas grenade to disperse the crowd.

Kenosha quickly transformed into a war zone in the wake of an altercation on Sunday, in which 29-year-old Jacob Blake was shot at close range – reportedly at least seven times – by a Kenosha police officer during an alleged “domestic incident.”

Elsewhere in the city, flaming barricades constructed with torched vehicles were erected, amid reports of widespread looting. 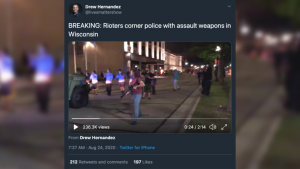