Vice is promoting a SPLC ‘hate map’ of Confederate monuments. This has led to violence before 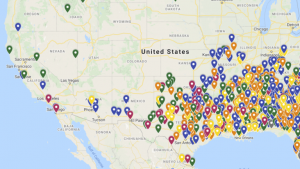 Vice is encouraging sledgehammer-wielding wannabe revolutionaries to use the Southern Poverty Law Center’s map of Confederate monuments as a destructive treasure map. And it didn’t end well the last time.

The Southern Poverty Law Center’s “Whose Heritage?” map depicts the southeastern US as positively bristling with racism, in the form of brightly colored tags representing Confederate monuments. Updated last year to reflect the removal of more than 100 such sites, it still boasted 1,747 at the time of its republication. As anti-Confederate fever flares up amid the George Floyd protests against racism and police brutality, and rioters take sledgehammers to any monument they believe they can link to slavery, Vice has helpfully trotted out the SPLC’s map again, handing the angry mob a to-do list that could keep them busy for months.

Don’t see your favorite monument on the map? Readers who think the map is “missing” a site can suggest an addition via a helpful submission form, which Vice provides a link to. Not that the invitation will be abused at all at a time when statues of even Thomas Jefferson – who, despite being a founding father and the principal author of the Declaration of Independence, held slaves and therefore had to go – are being pulled down.