by BY CHEYNA ROTH AND AMIRA ROSE DAVIS

On Thursday, WNBA superstar Brittney Griner was sentenced to nine years in a penal colony in Russia after she pleaded guilty to illegally bringing hashish oil inside a vape cartridge into the country, where she plays professionally during the American pro league’s off-season. Griner was also fined 1 million rubles, roughly equivalent to $16,260, in the judge’s decision.

Since Griner’s arrest and detention in February, many have speculated that her identity as a prominent queer Black woman made her a special target for Vladimir Putin’s government, which deploys anti-LGBTQ and anti-drug rhetoric and policies as pillars of its cultural propaganda campaigns. And because the charges came amid the start of Russia’s invasion of Ukraine, many observers also suspect that Griner is being used as leverage to ease international sanctions spearheaded by the United States since the war began.
The Biden Administration has reportedly explored a prisoner exchange with Russia that would involve exchanging Viktor Bout, a notorious international Russian arms trafficker known as the “Merchant of Death,” for Griner. 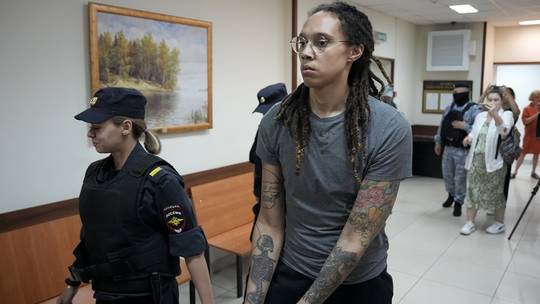