The War is OVER…Globocap Triumphs! 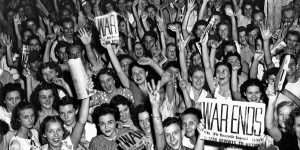 No, this is a time for looking ahead to the Brave New Global-Capitalist Normal, in which everyone will sit at home in their masks surfing the Internet on their toasters with MSNBC playing in the background … well, OK, not absolutely everyone.

The affluent will still need to fly around in their private jets and helicopters, and take vacations on their yachts, and, you know, all the usual affluent stuff. But the rest of us won’t have to go anywhere or meet with anyone in person, because our lives will be one never-ending Zoom meeting carefully monitored by official fact-checkers to ensure we’re not being “misinformed” or exposed to “dangerous conspiracy theories” which could potentially lead to the agonized deaths (or the mild-to-moderate flu-like illnesses) of hundreds of millions of innocent people.

But let’s not count our chickens just yet. As much as you’re probably looking forward to life in the Brave New GloboCap Normal, or the Great Reset, or whatever they end up calling the new pathologized totalitarianism, it isn’t a fait accompli quite yet … not until Russian-Asset Hitler has been thoroughly humiliated and removed from office, and anyone who voted for him, or didn’t believe he was literally Hitler, or a Russian asset, or who otherwise refused to take part in the mindless, corporate-media-generated Anti-Trump Hate-Fest, has been demonized as a “racist,” a “traitor,” an “anti-Semite,” a “conspiracy theorist,” or some other type of “far-right extremist.”