(Photo: The “Killing Fields” of Pol Pot’s Khmer Rouge in Cambodia from 1975 to 1979. During that time millions of Cambodians died of starvation, execution, disease or overwork during the reeducation and “transformation” of Cambodia into the “ideal” society. Pol Pot was ideologically a Marxist–Leninist and a Khmer nationalist. He applied the horrors of Marxist philosophy just as the communist playbook directed. Those who could not be “reformed” and “reeducated” were murdered.) 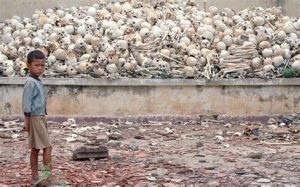 The DEMOCRATS/RINOS/NEVER TRUMPERS (NTs) are beginning the Purge. There are ample reports about this occurring. I have had opportunity to talk personally with those who endured the Khmer Rouge purge and lived in the reeducation camps. I have personally talked with family members who had loved ones exiled to the USSR gulags because of political views. The horrors of past history explain the unthinkable horrors that are becoming evident in the USA today. From the Halls of Congress to the rants of the news anchors on MSM that are broadcast to millions, the Purge is being encouraged.

There is a hit list targeting Trump and his supporters. It is confirmed that the PROGRESSVE/DEMS/RINOS/NTs have lists of those who need to be punished and reeducated. During the week of 10 January 2021 it was announced by Forbes that the large corporations in the USA must never hire any Trump supporter! Here is the threatening intimidation:  “Donald Trump devolved from commander-in-chief to liar-in-chief.” The magazine mocks Trump associates as “fabulists.” It goes on to say, “Let it be known to the business world: Hire any of Trump’s fellow fabulists, and Forbes will assume that everything your company or firm talks about is a lie. We’re going to scrutinize, double-check, investigate with the same skepticism we’d approach a Trump tweet.” Forbes then makes an explicit threat to report negatively on any company that dares hire any of the people supporting Trump. “Want to ensure the world’s biggest business media brand approaches you as a potential funnel of disinformation? Then hire away.”

This is not imagined—this is the current reality!