Posted on January 10, 2021 | By gassasb | No comments
[Graham Dockery is an Irish journalist, commentator, and writer at RT. Previously based in Amsterdam, he wrote for DutchNews and a scatter of local and national newspapers.]

Incoming President Joe Biden compared pro-Trump Republicans to Nazis and promised to direct the Justice Department to lead a crackdown on “domestic terrorism.” The equation of Trump supporters to terrorists here is implicit.

As politicians used every tool at their disposal to box Trump in, their allies in Silicon Valley made an unprecedented move. Trump was permanently banned from Twitter, his primary means of communication with the public, while thousands of accounts belonging to his supporters were deleted. A slew of other social media companies indefinitely suspended the president, with Facebook going further and banning all posts offering “praise and support” to the rioters, forbidding the sharing of images from inside the Capitol, and banning the organizing of similar protests.

The significance of Silicon Valley’s involvement can not be overstated. Big Tech worked hand-in-glove with big government to de-person the president of the United States of America and prevent his supporters from organizing.

Why such a crackdown would be instigated with just over a week left in Trump’s presidency boggles the mind. The social media companies have offered the justification of “keeping us safe,” but that’s likely a cop-out.

Rather, by giving Trump the Alex Jones treatment, they’ve effectively made him political poison and hampered any attempt he may make at announcing a 2024 bid. They’ve also set out a roadmap for how the Washington/Silicon Valley alliance will deal with any future threats to its power. Former First Lady Michelle Obama made this explicit on Thursday when she called on tech firms to step up their censorship efforts so that future “insurrection” can be prevented.

Every coup or counter-coup hinges on media control,  . . . that for the first time, foreign regime-change strategies are being openly deployed by Americans, against Americans, in America. 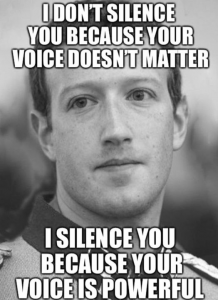