It is not known what weapon was used. However, it has already been tested in Syria since January 2020. It is a missile with a tactical nuclear component in its warhead that causes a smoke mushroom characteristic of nuclear weapons. It is obviously not an atomic bomb in the strategic sense.

The weapon was tested in Syria on a plain in the countryside and then in the Persian Gulf on the water against Iranian military vessels. This is the first time it has been used in an urban environment, in a particular environment that made the air blast and vibrations reflect off the water and the mountains. Far from destroying only the port of Beirut, it killed about a hundred people, injured at least 5,000 others, and largely destroyed the eastern part of the city (the western part was largely protected by the grain silo). 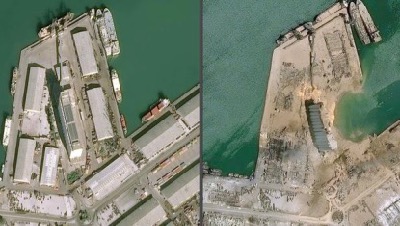 These satellite photos show the destruction of the Hezbollah warehouse and part of the port.

Israel immediately activated its networks in the international media to cover up its crime and lend credence to the idea of the accidental explosion of a fertilizer stockpile. As is often the case, false culprits are named, and the international media machine repeats this lie over and over again in the absence of any investigation. Yet there was indeed a smokestack incompatible with the thesis of a fertilizer explosion.