How Russia Can (And Will?) De-NATO-ize Europe

In a video published yesterday Gonzalo Lire, currently under house arrest in Karkov, is asking a very interesting question:

What Happens To Europe When Russia Wins? (vid)

Lira states . . . that Russia will win the war in the Ukraine, take the south and east to likely create a new country and leave the rest of the cadaver for Poland, Hungary, Romania, Lithuania and others to feast on.

Russia is a superpower in that it produces all kinds of raw materials the world, and especially the ‘west’, needs. Europe, and especially Germany, is depending on natural gas and oil from Russia. Energy prices in Germany will at least triple if it is completely cut off from Russian supplies.

German industry leader have loudly announced that they will have to close shop if the current European policies of restricting Russian energy supplies continues. The chemical giants BASF and Bayer will have to move to some other country. Volkswagen, Mercedes, BMW will have to stop all production in Europe. Steel production would fall to zero. Lack of fertilizer would lead to dependency on foreign agriculture.

Mass unemployment would follow. Millions will be in the street to protest against rolling blackouts, freezing apartments and hyperinflation.

Russia can achieve this at any time. It simply has to stop supplying gas and oil to Europe.

Despite six European ‘sanction packages’ against Russia there has yet to be a reciprocal response from Russia. It may still hope that European leaders will recognized the deadly game the U.S. is playing with them. 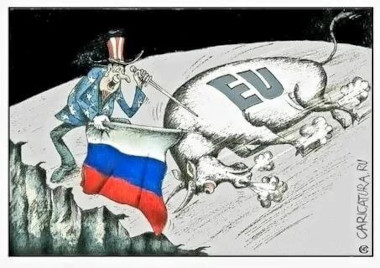 When you do business with Russians you learn time and time again that the options listed above are the last resort options. This is why I am quite sure that Russia will go all the way to the [Polish] border, so that when Galicia and other areas are possibly/potentially offered, it is from a position of strength and from knowing that none of these regions can/will be allowed to be used as yet another platform from which military or covert action is launched at Russia or its allies. Why would you ‘give away’ when you can be paid for it? Why would Russia allow for the Bandera / Shukevich streets and statues to remain?
You are currently seeing the reactions in Europe change, the narrative in the US slowly ready to ease out of the Ukraine misfit situation, and this will only lead to exacerbation and further panic in Europe and the USA as inflation is not at its summit yet, the wrong choices for dealing with inflation are not yet being felt; and the vast difference between a victorious economic and military Russia vs a shaken-to-the-core Europe and USA is not yet beyond the Dnepr. Imagine when the Russians are at the Polish border.
The moving parts which are not being put into the mix here are the vast consequences of economic implosion of both US stock market and housing market; their inability to resolve it with printing money; their inability to resolve it by raising interest rates. Rationing, social unrest, riots, hatred of the newly welcomed Ukrainian migrants and the potential impact of a huge wave from Africa… Put all those moving parts in there by the end of the summer, fall, and then have Russia come back and be the savior with offering long-term cheap gas contracts. But, with conditions: Poland, if you’re nice and behave and say goodbye to your American troop visitors, come and co-manage with us the Protectorate of Galicia. Hungary, how about you come help us with Transcarpathia….
In the process, politically and economically, Russia will hold all the cards and they will play them wisely.