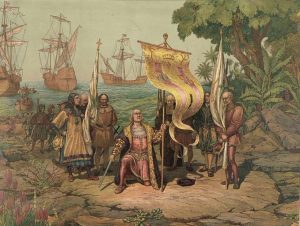 The Abraham Lincoln statue in Portland was toppled tonight by the “indigenous” faction of antifa who organized a “day of rage.” #PortlandRiots pic.twitter.com/HJ6ul7p4Hi

“F— all you colonizers!…Everyone of you that’s against Black Lives Matter can f— the f— off.”

Antifa rioters in the process of toppling the Portland statue of Roosevelt using chains. They were soon successful in pulling it down. #PortlandRiots https://t.co/XZVbVhJS41

Tonight the “indigenous” faction of antifa held a “day of rage” riot in Portland. They banned video recording as the criminal acts were planned ahead. They’ve toppled the statues of Roosevelt & Lincoln so far using chains. #PortlandRiots pic.twitter.com/PkTqxeCLIj

Portland communists have toppled the statues of Teddy Roosevelt and Abraham Lincoln both.

One of the participants of last night’s Portland antifa riot that resulted in the destruction of Roosevelt & Lincoln statues, in addition to the smashing of a museum & police office, is a woman who is running for Congress. #PortlandRiots #antifa https://t.co/F5kOIXARbb pic.twitter.com/hv8dNx1FY2