German magazine declares Trump’s the DEVIL to be blamed for all that ails America. But he’s not the illness, just a symptom of it 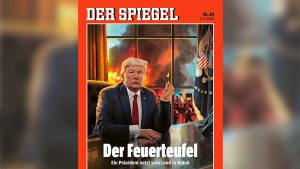 Rather than ask Professor Rosa Brooks to elaborate why she finds it “hard not to think about the Reichstag fire” when contemplating the events of the past few weeks, however, Der Spiegel merely describes an increased police presence around the White House, the erection of a new meter-high fence, and a now-notorious helicopter stunt in which a military bird marked with Red Cross insignia dived low to disperse protesters. The latter “show of force” has figured prominently in nearly every piece describing the Trump administration’s supposed overreaction to peaceful protests in Washington DC.

No mention is made of the various state governors who jumped at the chance to declare states of emergency amid the coronavirus pandemic, seizing as much power as they could grab in the name of the virus while Trump himself – despite media pearl-clutching turned up to 11 – remained curiously restrained. Even as he has called for designating Antifa activists as “domestic terrorists,” the president has left the actual prosecution up to Attorney General William Barr. The AG, in turn, has largely passed the buck to state governors – an issue which continues to frustrate Trump when those governors refuse to accept the “help” he’s offered in the form of the National Guard.