Yesterday the presidential candidate for the Democratic Party Joe Biden was allowed to leave his basement for a “campaign event” in Pittsburgh. 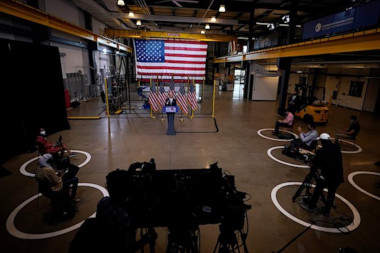 bigger
Here is one of the curious things he said (vid):

“Covid has taken this year, just since the outbreak, has taken more than 100 year, look, here’s, the lives, it’s just, when you think about it.”

The Democrats . . . are preparing a well known tactic to snap some victory from the likely defeat. As we described in a piece about Belarus some months ago:

Color revolutions are usually launched over controversial elections. The results are publicly put into doubt even before the election begins. When the results finally arrive western media will claim that they diverge from the expectation it created and therefore must have been faked. People will be pushed into the streets to protest. To increase the chaos some sharp shooters may be put to work to fire at the police and at protesters like it was done in Ukraine. The revolt ends when it is flogged down or when the U.S. favorite candidate is put into place.

If one replace ‘U.S. favorite’ with ‘borg favorite’ one can foresee how such a situation might develop.

Democrats under Hillary Clinton advisor John Podesta have war-gamed such scenarios. Their “Transition Integrity Initiative” report presumes, without much basis, that Trump will steal the November election:

Like many authoritarian leaders, President Trump has begun to lay the groundwork for potentially ignoring or disrupting the voting process, by claiming, for instance, that any mail-in ballots will be fraudulent and that his opponents will seek to have non-citizens vote through fraud. Similarly, he has frequently expressed the view that he is entitled to additional time in office and that his opponents are seeking to steal the election.

Diana Johnstone has looked at the details of the report. She concludes:

Next, “a show of numbers in the streets – and actions in the streets – may be decisive factors in determining what the public perceives as a just and legitimate outcome.” In an interview, stressing “the flaws in our electoral system,” Transition Integrity Project organizer Gilman said that what we need “is for people to be prepared to take to the streets in nonviolent protest” if appeals to officials do not suffice.

“We’ve learned over the last couple of months, since the Movement for Black Lives protest really took off again in the wake of George Floyd’s murder, that taking to the streets and showing commitment to a democratic process beyond just the ballot box is a really important part of driving change.” The demonstrations must be nonviolent, Gilman stressed.

As the Transition Integrity Project report put it, “the scale of recent demonstrations has increased the stakes for the Democratic Party to build strong ties with grassroots organizations and be responsive to the movement’s demands.”

The Democrats are ready to litigate the election as long as possible:

The Democrats have chosen an extremely weak candidate. To still have a chance to regain the presidency they are preparing for a strategy that is similar to the color revolutions the CIA has for many decades used against unwanted foreign governments.

Just like the weapons and tactics of foreign wars have found their way back into the streets of U.S. cities the color revolutions the U.S. applied elsewhere are now coming home.

I see no sign that Trump will sincerely contest the election should the vote be clearly against him. But the race is tight and the outcome will likely be decided in a few contested states. The Democrats are willing to battle for each of them. How can Trump respond to their plan to win a contested outcome by the means of a color revolution no matter what?

The best policy is likely to take the high ground and to expose the Democrats’ campaign for what it is.

But Trump being Trump will not have the patience to sit through the process. He, and his supporters, will likely counterattack with all the means they have.

The lively street actions of the recent weeks may in retrospect look like the quiet before the storm.