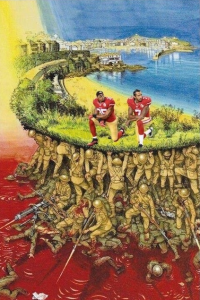 Last weekend, facing death threats and a kangaroo court, and with no means to mount a defense, Gardner killed himself, rather than be killed by the mob waiting for him back in Omaha.

This is the part of the column where I make a clarion call for action. How about civil suits against the monsters in the prosecutor’s office, against the criminal-supporting GoFundMe and the Facebook and Twitter defamation mobs! Maybe a department of justice investigation or FCC action against biased social media companies. Antitrust suits. Boycotts!

I’ve got nothing. The country has gone mad. I always figured the first armed civilian who ever fought back would put an end to the violence exploding all over the country—the violence that police and prosecutors can’t or won’t stop. “We have the guns,” conservatives like to say. In fact, it’s even worse now.

It’s official: You can’t protect yourself. Not even a blameless ex-Marine could defend himself from being choked to death. The D.A. will call in a “special” prosecutor to throw you to the wolves, and they’ll both be praised for railroading an innocent man in the Omaha World Herald, while the “elite” media defame you.