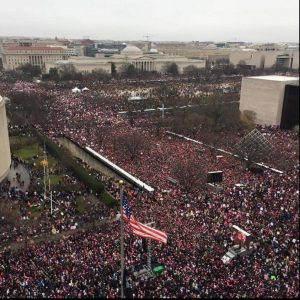 The “unknown unknown”, to evoke notorious neo-con Donald Rumsfeld, is whether the exasperated plebs will eventually reach for the pitchforks – and make the 0.0001% feudal hacienda ungovernable. And then there’s a literally smokin’ element – those half a billion guns out there.

The 0.0001% knows for sure that Trump, after all, was never a radical revolutionary change agent. Inchoately, he channeled Red America’s hopes and fears. But instead of the promised glitzy palace adorned with gold, what he delivered was a shack in the desert.

Meanwhile, Red America, intuitively, understood that Trump at least was a useful conduit. He lay bare how the corrupt swamp actually moves. How these “institutions” are mere corporate puppets – and completely ignore the common man. How the Judiciary is utterly corrupt – when even POTUS cannot get a hearing. How Pharma and Tech actually expanded the MICIMATT (MICIMAPTT?) And most of all, how the two party paradigm is a monstrous lie.

So where will 75 million disenfranchised voters – or 88 million Twitter followers – go?

As it stands, we’re deep into Hardcore Class War. The Top of the Scam Gang are in full control. The remains of “Democracy” have gelled into Mediacracy. Ahead, there’s nothing but ruthless purge, protracted crackdown, censorship, blanket surveillance, smashing of civil liberties, a single narrative, overarching cancel (in)culture. It gets worse: next week, this paranoid apparatus merges with the awesome machinery of the United States Government (USG).

So welcome to Full Spectrum Domestic Dominance. Germany 1933 on steroids. 1984 redux: no wonder the hashtag #1984 was banned by Twitter.

Cui bono? Techno-Feudalism, of course – and the interlocking tentacles of the trans-humanist Great Reset. Defy it, and you will be cancelled.