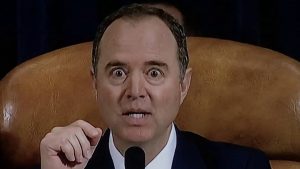 There were two especially notable testimonys made during the recent House impeachment inquiry that should have been ‘nothing to see here folks, let’s move on’ except that The Grand Poo-bah of the Intel Committee Chair Adam Schiff, haughty in his own insecurity and full of his usual self-regard, bugging his eyes in anticipation, continues to act as if he is living in a reality where facts and evidence are non existent.

In a series of mental meanderings, House Speaker Nancy Pelosi’s statement that two career diplomats had provided “corroborated evidence of bribery” was little more than off-hand ramblings with no evidence of exactly what was corroborated.

Upon questioning, Pelosi defined ‘bribery’ as the President’s alleged withholding of military aid to Ukraine in exchange for an investigation into the Biden’s financial bonanza.

In contrast to Pelosi’s allegation, neither of the career diplomats aforementioned presented any “corroborated evidence of bribery” nor has any testimony confirmed that bribery occurred.

As Lord High Justice of the Misguided Society of Wild Goose Chases, the myopic Schiff Show moves on this week to the House Judiciary Committee with more disgruntled witnesses on Wednesday who have, as of the 2016 election, lost any objectivity or claim to legal scholarship.