1905: The End of the Omnipotent White Man

The beginning of the 20th century may be taken as the approximate high point of Western world domination, if not necessarily of European civilization itself. Whites made up some 30 percent of the earth’s population and directly or indirectly controlled most of its territory; white economic and technological dominance were even more complete. American writer Lothrop Stoddard describes in colorful language our race’s serene confidence at that moment:

The thought that white expansion could be stayed, much less reversed, never entered the head of one white man in a thousand. Why should it, since centuries of experience had taught the exact contrary? The settlement of America, Australasia, and Siberia, where the few colored aborigines vanished like smoke before the white advance; the conquest of brown Asia and the partition of Africa, where colored millions bowed with only sporadic resistance to mere handfuls of whites: both sets of phenomena combined to persuade the white man that he was invincible, and that the colored types would everywhere give way before him and his civilization.

But in 1905, a surprising turn of events shocked white and non-white alike. Japan gained a decisive military victory over a sprawling European empire with a population more than three times its own: Russia. No one expected such an outcome, yet it was to prove a sign of much to come.

In the largest terms, I think two things are going on.

First, Iran and Israel have been on a tripwire for a good while now—this should be news to no one. Can anyone imagine that things are otherwise than both regimes being fully-prepared to take preemptive action?

Obviously it is entirely possible that when one of them does take preemptive action, this will become nuclear very quickly, quite possibly from the very start. Indeed, the most likely scenario is that Israel makes a preemptive strike, and that strike could very well take the form of their using one of their highly-advanced military aircraft to drop a hydrogen bomb on Tehran.

So here’s my entirely speculative tea-leaf reading: If there’s a hidden agenda behind the urgency to remove Trump, one that might actually garner the votes of Republican Senators, it is to replace him with a president who will be a more reliable and effective leader for a military attack on Iran that Israel wants to initiate before next November. Spring is the cruelest season for launching wars.”

The Left I grew up with was the Sixties Left, and they used to be a great source of historical memory, and of anti-imperialism, civil rights, and ordinary working-people empowerment.

The current Left, and whatever array of Democratic-Party supporters, have received their marching orders, finally, from commander Pelosi (in reality, something more like a lieutenant), so the two weeks or so of “immense concern” about Iran has given way again to the extraordinarily-important and solemn work of impeachment.

But then, impeachment is about derailing the three main aspects of Trump’s agenda, so you see how that works. Indeed, perhaps the way this is working is that Trump did in fact head off, whatever one thinks of the methods, a war with Iran (at this time! – and I do think this is but a temporary respite), or more accurately, a war between Iran and Israel that the U.S. would almost certainly be sucked into immediately.

So, it’s back to Plan A for the Democrats and the “Left” that would be laughably absurd if it wasn’t so reactionary, to get the neoliberal/ neoconservative endless-war agenda back on track, so that the march toward Iran can continue sooner rather than later. For now, the more spectacular the failure of this impeachment nonsense, the better!

To be sure, the Iranian air defenses were on high alert fearing an American attack in the wake of the U.S. government’s assassination of Soleimani on January 3rd followed by a missile strike from Iran directed against two U.S. bases in Iraq. In spite of the tension and the escalation, the Iranian government did not shut down the country’s airspace. Civilian passenger flights were still departing and arriving in Tehran, almost certainly an error in judgment on the part of the airport authorities. Inexplicably, civilian aircraft continued to take off and land even after Flight 752 was shot down.

What seems to have been a case of bad judgements and human error does, however, include some elements that have yet to be explained. The Iranian missile operator reportedly experienced considerable “jamming” and the planes transponder switched off and stopped transmitting several minutes before the missiles were launched. There were also problems with the communication network of the air defense command, which may have been related.

The electronic jamming coming from an unknown source meant that the air defense system was placed on manual operation, relying on human intervention to launch. The human role meant that an operator had to make a quick judgment in a pressure situation in which he had only moments to react. The shutdown of the transponder, which would have automatically signaled to the operator and Tor electronics that the plane was civilian, instead automatically indicated that it was hostile. The operator, having been particularly briefed on the possibility of incoming American cruise missiles, then fired.
https://www.globalresearch.ca/who-targeted-ukraine-airlines-flight-752-iran/5700765

We have to assume that Iran now has terminal guidance capability on many (most?) of its ballistic and cruise missiles and that they can destroy one specific building amongst many more buildings.  Now, remember the Iranian reply that it had 35 US bases within missile range?  Now imagine this first one:

Next, let’s try the same thing with Israel:

How about the KSA?

I think that the bottom line is clear: Iran can inflict unacceptable damage upon any party attacking it.  Furthermore, and unlike having “a few” nukes, Iran has hundreds (or even thousands) of cruise missile and ballistic missiles, and you can bet that they are well distributed and well protected,as shown by this short video released by the IRGC and posted by the FARS news agency:

Kudos to Greg Abbott (R-TX) for becoming the first governor in the country to say no to more refugees after Trump gave local authorities the option.

“At this time, the state and non-profit organizations have a responsibility to dedicate available resources to those who are already here, including refugees, migrants, and the homeless,” Abbott wrote. “As a result, Texas cannot consent to initial refugee resettlement for FY2020.”

This is bad news for Democrats. Their strategy for achieving total national domination by flipping Texas blue and then abolishing the Electoral College relies on displacing the native population with “refugees.” Many of these welfare colonists invade across the underdefended border from places like Africa, then demand asylum.

Any Republican would be a fool not to fight this tooth and nail, since the point is to leave them politically marginalized. The Third World is never going to run out of “refugees”; import enough of them, and Democrats will win every election by running on their usual platform of confiscating wealth from those who create it to buy votes from those who don’t.

Yet Abbott stands alone. Other Republican governors are eager to help destroy their party not to mention their country by volunteering their states for colonization. Via Breitbart:

To date, these Republican governors in 18 states have asked the Trump administration to continue resettling refugees in their states:

In his new book “Triggered,” Donald Trump Jr “pushes the trope that American kids are all dumb and in debt” because they got PhDs in “basket weaving” but praises H-1B visa workers as the world’s “best and brightest,” Progressives for Immigration Reform reports.

In his new book “Triggered”, @DonaldJTrumpJr pushes the trope that American kids are all dumb & in debt because they got a Phd. in “basket weaving” while maintaining that H-1B visa workers all high-skilled “best & brightest”, & wants MORE to come. pic.twitter.com/zrr1JrjkDW 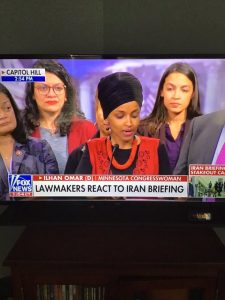 Please tell me I’m not the only one uneasy that this crew gets classified briefings for our national security
https://twitter.com/tomselliott/status/1215011792860135424

Basically, lots of people, even inside the ivory towers, think that they are charlatans.
Yet how much respect do proponents of gender studies, masculinities studies, queer studies, sexuality studies, psychoanalysis, critical race theory, critical whiteness theory, and fat studies actually expect?

Last night Iran fired 22 Qiam missiles towards two U.S. bases in Iraq. Between 1:45 and 2:15 local time (~22:00 UTC) seventeen missiles hit the Ain al Assad airbase west of Ramadi. Five missiles were aimed at Erbil airport in the northern Kurdish region of Iraq. There were no casualties.

The Swiss embassy in Tehran, which represents the U.S., was warned at least one hour before the attack happened. Around 0:00 UTC the U.S. Federal Aviation Administration issued a Notice to Airmen (NOTAM) which prohibited civil U.S. flights over Iraq, Iran, the Persian Gulf and the Gulf of Oman.

This attack was the “open” and “proportional” response for the U.S. assassination of Major General Qassem Soleimani which Iran’s Supreme Leader Ali Khamenei had promised. It will certainly not be the only response but represents the opening shot of a long and much more silent campaign to kick the U.S. out of the Middle East.

The Grayzone held a live discussion of the US escalation of war on Iran and Iraq, with Trump’s assassination of General Qasem Soleimani and PMF commander Abu Mahdi al-Muhandis.